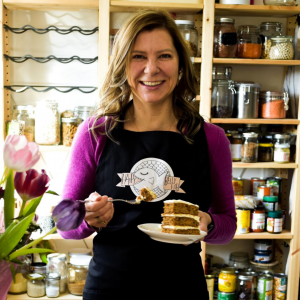 Barbara Donnelly is a vegan baker from Vienna, Austria, and a holistic nutritionist, who currently lives in Portugal.

She has overcome severe digestion issues after she switched to a plant-based diet, and since then she’s been on a mission to master the art of healthy vegan baking. Being originally from Austria, she spent over two decades living in different countries and exploring holistic nutrition as the key to a healthy and balanced life.

Barbara is the creator of the online course Vegan Baking: Cakes, Cookies and Pies. In this course she is tapping into the baking traditions of Europe and North America, and presenting the vegan versions of famous classics like Black Forest Cake and Cinnamon Rolls. Barbara was named among Top 20 Holistic Nutritionists.

During the Summit Barbara will be hosting a cooking workshop on the 23rd of September, at 8 AM (EST):

Superfoods for Desserts: Carob from Farm to Fork. Making Your Own Carob Powder and Creating Sweets with It.

If you are interested in vegan baking, you can take a free trial online class with Barabara on making vegan pies and galettes.